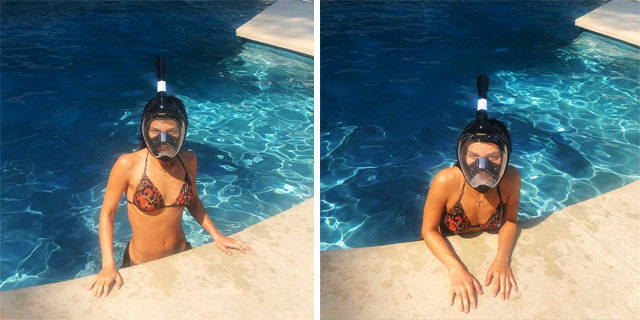 No, it's not the long-awaited Masochism. She's on OnlyFans.

The Beyoncé-approved platform OnlyFans has not been without its share of mainstream controversies, but that hasn't stopped celebrities from signing up by the droves, and now Esfahani joins Cardi B, Bella Thorne, and Dorinda Medley as a card carrying member.

Alongside a series of poolside snorkeling photos, Esfahani posted about her new endeavor on October 10th via Instagram, proclaiming that, "bernie lost and i misplaced my ex-boyfriend's credit card so i'm a capitalist now (don't ask me what that means i did not finish high school and my only knowledge of government comes from eli5 venn diagrams), please join me on onlystans for $4.99 a month - yes i will be naked, no it will not be hot."

She's since followed up on that promise with a series of increasingly bizarre livestreams, including a two hour topless guide through skinning a squirrel, a "watch along" of Creep 2 (a movie in which Esfahani stars) wherein she did very little commentating and seemed only to indulge ASMR fetishists with close up chewing of seaweed chips, a dramatic reading of Nicole Richie's 2006 MySpace blog posting referring to Rachel Zoe as a "raisin face", a stream that began with a tutorial on The Exorcist crab walk and ended in Esfahani listening to Russian synthpop and audibly crying behind the camera as she engaged in long shots of her pet cockroach walking on a doll, and 45 minutes of Esfahani trying to pick a dimple lock while simultaneously offering a nonsensical tutorial on how to make ghormeh sabzi "almost" as good as her own. What her OnlyFans hasn't reaped is a new single.

Frankly, we expected nothing less from a woman whom director Gaspar Noe once referred to as a kindred spirit.

BillyCorganApologist
The best thing about Naz is she's so consistently a trainwreck that whatever she's doing is guaranteed to make me uncomfortable, and then I feel deep confusion overwhelm me over why I'm uncomfortable. I subscribed because what's five bucks a month, right? I didn't expect the level of consistent content she's giving, but I'm also unsure if watching a half-naked woman skin a squirrel is really qualifiable as content? Am I watching performance art or a stranger losing grip on her sanity?

smokysignals
i stan naz forever and normies like u make me wanna die, this is her at peak sanity like she seems genuinely peaceful in all these videos idk why people see somebody crying and assume they're hysterical or insane lol try getting in touch with your emotions u toxic bitch

butterflysoup
it's not performance art she's just legitimately dumb and people try to read into it when there's nothing there, she's financially and mentally bankrupt, comparing naz esfahani to david lynch is like comparing jimmy fallon to elon musk - stereogum what are you doing???

cornpuff
the whole "yes i'm naked, no it's not hot" shit is irritating af because despite the celeb influx, onlyfans remains a place for SEX WORKERS to make money - how are you gonna roll up on THEIR platform and act holier than thou about how everyone else is hot but ohhh you're not, you're sooo quirky, you're gonna do back bends without any makeup on because ur sOoOo RaANddOoM!!!! especially when you're subscribing to the SAME beauty standards as everyone else? we see your fake ass lips sis c'mon

stressedaf
naz is back on her bullshit, this is all the shit she'd do on her insta lives but make it #FreeTheNipple - i guess if people are willing to pay for it then more power to her